So I’m trying something new, a top 11. Why a top 11 you ask? Well because when I made up a list it had 11 films on it and I didn’t want to drop any. So if this feature continues, I’ll either stick with 11 or maybe have a different number each time. We shall see.

Anyway this is a list of Bruce Willis’s top performances, not necessarily his best films. If it were best films, no one would bother reading on as we all know it’s North.

In at eleven is The Sixth Sense. A thriller in which (spoiler) Bruce plays a dead guy. So first film on the list has Bruce as a stiff.

Time travel and slow motion train station scenes. A great performance in a great film. Also, I have been reliably informed that Bruce can do his own slow motion work.

Something completely different at number eight. Death Becomes Her shows Bruce as an alcoholic plastic surgeon. Not his film, but a great performance.

Bruce plays a baby. He’s the voice of a baby, brilliant.

This was something different from what we’d seen Bruce do in the past. A boxer who’s meant to take a dive, but doesn’t. Great character, in a great film, with a great line. ‘It’s a chopper baby,’ ‘who’s chopper is this?’ ‘Zed’s,’ ‘who’s Zed?’ ‘Zed’s dead baby, Zed’s dead.’

This is the only film in the list from the 21st century. I’m not sure what this says about dear Bruce now, but this was the only one worth mentioning.

This one stands out for the fact that he isn’t just playing a grumpy Bruce Willis. I think Wes Anderson can definitely bring the best out of people.

Armageddon may not be your cup of tea, but you cannot deny how great Bruce Willis is. His scene with Liv Tyler over the satellite TV link will have even the toughest viewer with a lump in their throat. Then at the end, ‘Permission to shake the hand of the daughter of the bravest man I’ve ever met.’ Goose bumps. Also, Michael Bay’s last decent film in my opinion.

This was prime Bruce Willis time. He was probably the number one action star at this time, and The Fifth Element really showed he could have fun with these roles. A sci-fi action epic in which him and Milla Jovovich are absolutely brilliant. His timing is spot on and his acting alongside Lee Evans and Chris Tucker is great.

‘Welcome to the party pal.’ Do I need to say any more?

Joe Hallenbeck is a better character than John McClane, okay I’ve said it now. Joe gives zero fucks when it comes to life. He just wants to get the job done and get paid. Along the way he’ll give out witty one-liners, smoke some cigarettes and kill people who get in his way. ‘Sure, it was an accident. You slipped, fell, and accidentally stuck your dick in my wife. Oh sorry Mrs H, this just isn’t my week.’ Classic! 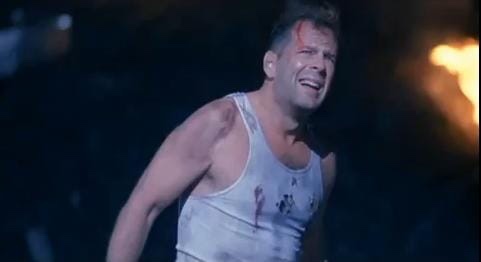 This may be a surprise, but my favourite performance from Bruce Willis is without a doubt his cameo in Loaded Weapon 1. This is a brilliant comedy spoof littered with jokes and takes the piss out of so many films, but the scene where they attack the caravan on the beach, which is originally from Lethal Weapon 2, is genius. They shoot up the caravan, which explodes, and then a white flag appears being held by Bruce Willis in full Die Hard outfit.

Check out the scene for yourself.

So that’s my list. Did I miss any off? If you have a performance that should have been on their, let me know in the comments.