Quick Verdict: A return to form for the franchise.

So everyone knows that Ocean’s Twelve was a particular low point for the Ocean’s films. Having the Julia Roberts character look like Julia Roberts is something we’d all like to forget.

This film has taken a close look at what worked with the original and given it a new spin. It certainly doesn’t break the mould, but if are watching an Ocean’s film, you do expect a certain kind of heist film. It isn’t like last years Widows, it’s clean and slick, and almost like a synchronised dance. In Mark Kermode’s Secret Of Cinema Heist episode, he talks about the perfect heist formula, something this film is doing to the letter. 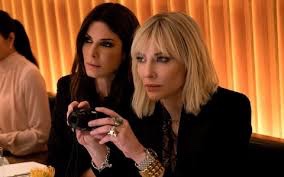 It isn’t perfect, but I think it definitely ranks in second place for the franchise, and if they can get a decent story, I’d be happy to watch a sequel.