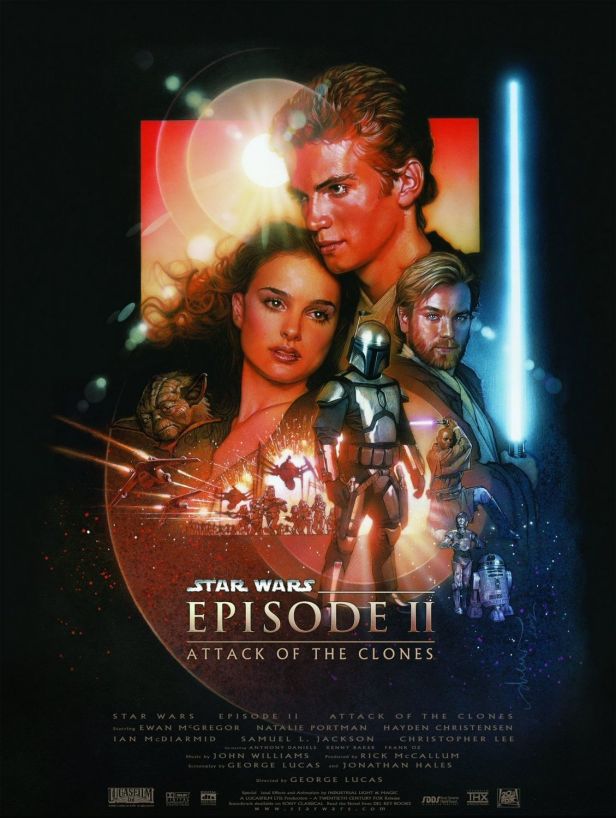 So who came out of the cinema really impressed with Attack of the Clones? I will have to put my hand up to that. As will as some of my friends and Chris Hewitt from Empire Magazine who gave it 5 stars. (something he still hasn’t been forgiven for) But why? What did we see on that first viewing? Were we drugged? Did we actually watch a different film? Or did we all just get over-excited about Yoda getting his little lightsaber out?

Well this film has some of the worst dialogue ever. Most scenes with Anakin and Padme are really awkward and just plain creepy. ‘And now that I’m with you again…. I’m in agony. The closer I get to you, the worse it gets. The thought of not being with you – I can’t breath. I’m haunted by the kiss that you should never have given me. My heart is beating…. hoping that kiss will not become a scar. You are in my very soul, tormenting me… what can I do? I will do anything you ask.’ RUN PADME RUN! Sorry, I feel the entire quote really proves my point.

The film is a massive CGI fest, more than Episode 1. The action is ramped up, but with all the ridiculous jumps and near misses that are all so stylised, it just loses any kind of jeopardy. The plot isn’t great and really misses a decent villain. Killing Darth Maul off was a big mistake. Christopher Lee is okay, but is introduced so late on that he doesn’t make an impact.

So for the positives. We have less Jar Jar, Samuel L Jackson gets in on the action with his purple lightsaber. The biggest positive however, is if you own the DVD, if you just watch alternate scenes, you skip all the Padme/Anakin love story. (It’s not entirely accurate, but it kind of works)

So like with episode 1, I have included the YouTube clip of ‘What if Star Wars Episode 2 was good?’ By the talented Belated Media. It’s well worth a watch.

One thought on “Star Wars Episode II: Attack Of The Clones”